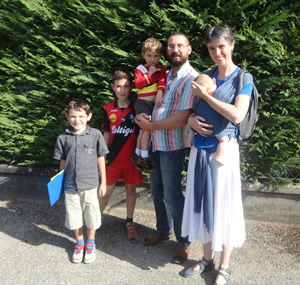 Emmanuel and Esther Durand are a Franco-Welsh couple. They work in France with UFM Worldwide. Esther was born in Bangor, in North Wales and Emmanuel was brought up in a small village above Chambéry, in the French Alps. They have 4 children: Jean-Baptiste (14), Maxime (11), Benjamin (8), and Clémence (5).

After several years in Cardiff, they moved to Guingamp, Brittany, in August 2010 to work in the context of a local church. In August 2014, they moved to Cognin, on the outskirts of Chambéry, in the French Alps.

Cognin is a small town of about 6000. There has been an evangelical witness in Cognin for the last 27 years. The church they attend is the church where Emmanuel grew up. It is also where Emmanuel and Esther met. Over the last few years, the church has grown, with about 30 members. 40 to 50 people attend on Sundays, including a few students from the local university. Emmanuel now leads the church as an elder.

Emmanuel and Esther’s main burden is to make Christ known in France, but also to help French Christians to grow in grace and in the knowledge of the Lord.