Hallelujah! Praise the Lord! At long last, the Meta New Testament project has been completed.

Klaus and Janice Spreda were assigned to the project in 1975.They worked on the language, learned it, analyzed it, drew up a spelling system for it, described the grammar and compiled its first dictionary.They were aided by a team of Meta speakers, among whom the late John Takud shone as a man with a particularly deep insight into his language.Translation was begun and eventually Matthew’s Gospel was published. Klaus and Janice had other assignments with the German branch of Wycliffe Bible Translators, which impeded the progress of the work; as did bouts of illness. When they retired about 10 years ago, a good portion of the New Testament had been composed in first draft, and eventually under a new translation team, the whole New Testament was translated, checked for clarity and accuracy, tested in the villages and eventually edited into its final form. Great care was taken to ensure that the final printed version was clear of any defects, and so 5,000 copies were printed by a company in South Korea.They arrived in Cameroon in good time for their‘launching’ in Meta-land on Saturday 1 March 2014. 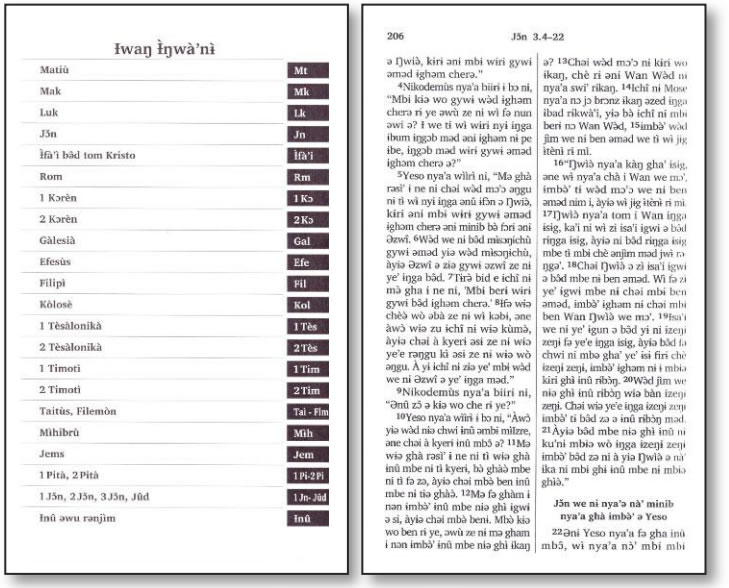 Klaus and Janice were invited to attend the launching, but did not feel well enough to make the long journey, and so came the invitation to Paul Tench to represent them there, and represent the whole church too as we had supported Klaus and Janice and the Meta Project for all those years. The great day came, but still there was no sign of the New Testaments themselves; they were deliberately held up by customs officers in the hope of a bribe, but the Cameroonian Association for Bible Translation and Literacy (CABTAL) refused to bribe. However, the dedication went ahead with half a dozen copies held by the translation team. (As soon as the launching was over, and the customs could exert no more pressure, the New Testaments were released!) 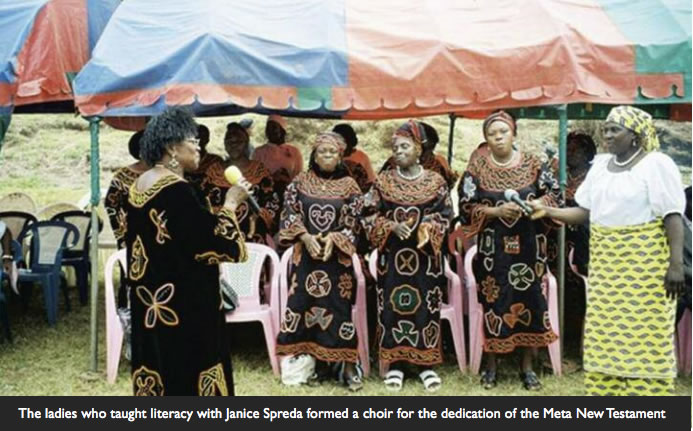 It was a grand occasion, with covered seating all around the local football pitch. Processions took place; various choirs performed, a local band with dancers participated; there was a lot of noise, and then a lot of speeches. But just as the speeches began, down came the rain! Heavily! Very heavily!! No matter where we sat or stood under the canopies,rain leaked through and drenched us all. Speakers were covered with umbrellas, but on we proceeded with the programme. German Wycliffe were represented and then came my turn. I brought greetings from Janice’s home church and that brought cheering from the choir of lady literacy workers; I took a final substantial gift from the missionary committee – and that brought cheering too! I took a Welsh flag because it was St David’s day, and I explained how Griffith Jones of Llanddowror set up the circulating schools to help the people of Wales to learn to read, so that they could read the Bible for themselves in their own mother tongue and how it had led to great revival, and wished the same for the Meta people. I presented the Chief with a Bible in my own mother tongue as a gift from the Pastor, because he had been unable to do so when he visited them in 2007.

It was a great day, even though we were all soaked through to the skin. It was followed by three extra days: on Sunday I attended the dedication of a new church building in Nyen where Klaus and Janice had lived, visited a number of people in the village who knew them and then the big city of Bamenda. People remembered them with great affection, Klaus with his superb command of the Meta language and his painstaking efforts to prepare the linguistic material, and Janice with her friendliness among the people and especially for all her efforts with the lady literacy workers. It was a great joy and privilege to meet some of these people and to acquaint myself with the roads and villages that they once travelled along. I explained that our financial support had now come to an end, but our support in prayer needs to continue, for the people to get used to reading their new New Testaments, hearing them read in church and in school, memorizing them, but above all, believing the eternal Good News that they carry.